Efficient operation and energy consumption with partial shade or damage 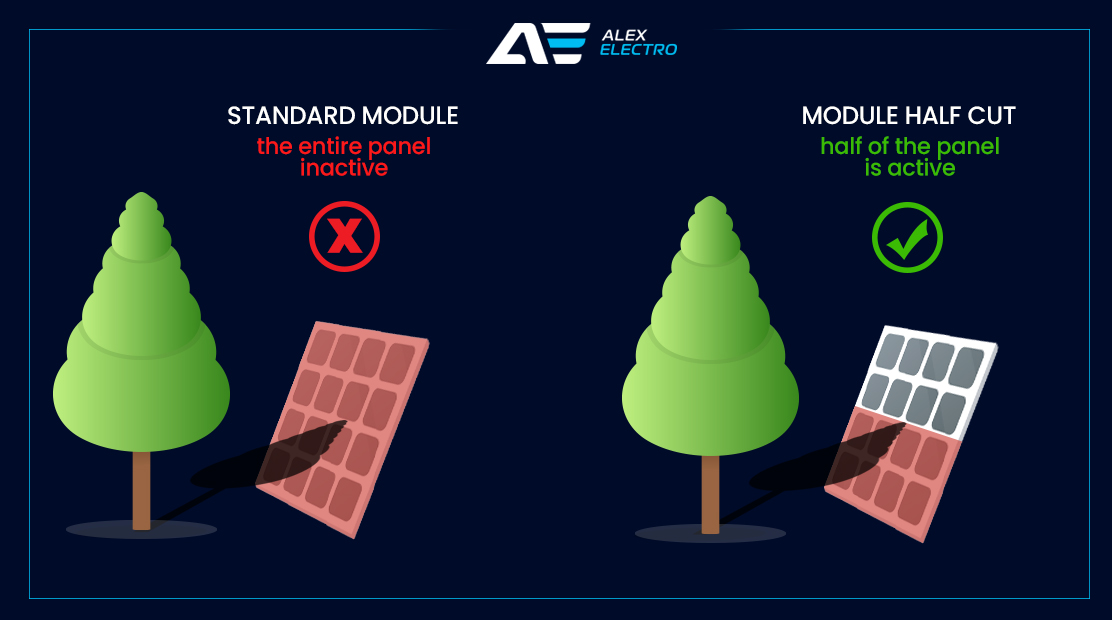 What is the HALF CUT module?

HALF CUT is the name of the half-cut cell module.

Characteristics of HALF CUT Modules

The cell surface in HALF CUT is half the size of a traditional module.

As a result, it generates a correspondingly lower current. Its electrical resistance is twice as low. The use of half cells reduces the power losses on the PV cell – PV module line up to four times!

HALF CUTs have a lower current load on busbars and cells.

Thanks to that they do not heat up as intensely as standard ones. This is especially important in strong sunlight. Under standard conditions, the temperature of the half cells reaches up to about 2 degrees C lower than the module in the classical technology. As a result, their service life is extended and energy yield is increased.

Shading not so scary with HALF CUT modules

A half module packet consists of a sub-item connected in parallel and independent of each other.

This solution enables the operation of the entire cell even with partial shading. The situation is adequate when the module is dirty and it is mechanically damaged. In the case of technological technology, shading, lowering the limits of external parts and language gaps. With HALF CUT technology, only one half stops working.

HALF CUT – even more durable

Due to the reduction of the cell surface, the resistance to mechanical damage increased.

Lower stresses will reduce the risk of micro-damage, e.g. during transport, strong wind, or snow loads. As a result of microcracks, the heating of these places increases. As a consequence, our installation loses power and uses up the solar battery faster. Thanks to HALF CUT technology, we can be sure about the operation of our installation for many years.